The mission was simple: Do as many South Dakota bucket list things as possible in 72 hours. I got this. Obviously, after landing in the mid-afternoon, I wasn’t going to check in to my hotel first. I wasn’t going to waste any time. So I headed to the hills.

And to the hills, or rather hill, I went – to Crazy Horse Memorial near Custer. I had actually visited it as a teenager a couple decades prior, when it was little more than a face you could make out in a large carved rock. Oh, what a couple of decades can do. Peeking over the hill to catch my first glimpse of Crazy Horse, I exclaimed, “Oh, whoa.” And that was the first of many “whoa” moments.

It was minutes later that I was actually standing on Crazy Horse’s arm, touching his face, as the sun started to go down over South Dakota. It was such a surreal experience. While people often marvel at nearby Mount Rushmore National Memorial, I was taken aback by the craftsmanship, detail and story of Crazy Horse Memorial. And, it’ll only continue to evoke such emotion, since it won’t fully reach completion for a number of years. Now that’s a living piece of art.

I checked into The Rushmore Hotel, which couldn’t have been more convenient, located just off Main Street in Rapid City and within walking distance of a number of restaurants. I started at the Independent Ale House, which I had gotten more recommendations for then any other restaurant in all of South Dakota. And it didn’t disappoint, with great personal-sized pizzas and, the best part, more than 40 beers on draft and more than 100 different bottled beers. I finished the day with a nightcap cocktail at Kōl, which had the vibe and cocktail menu like I would’ve expected from NYC, not South Dakota. 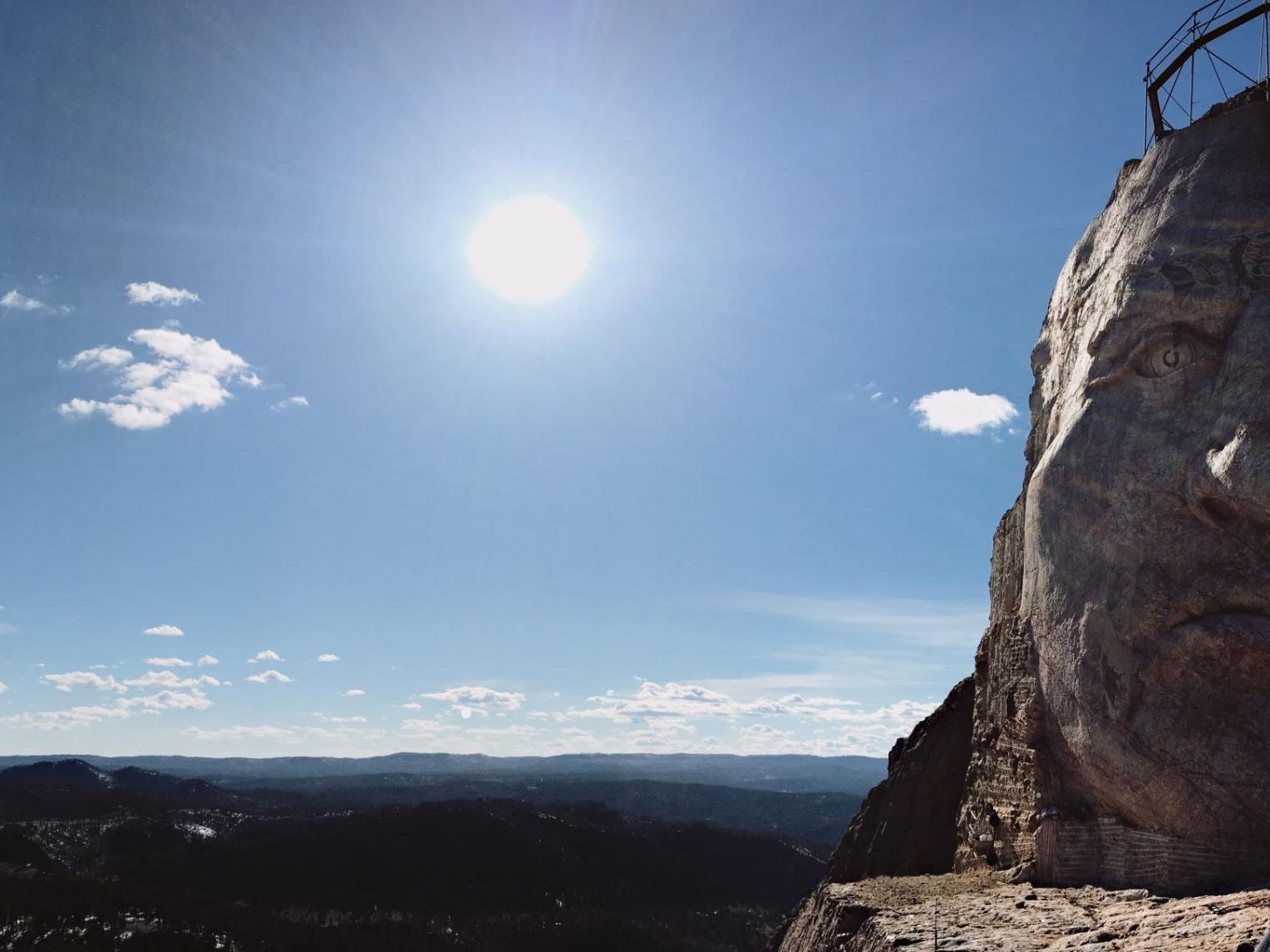 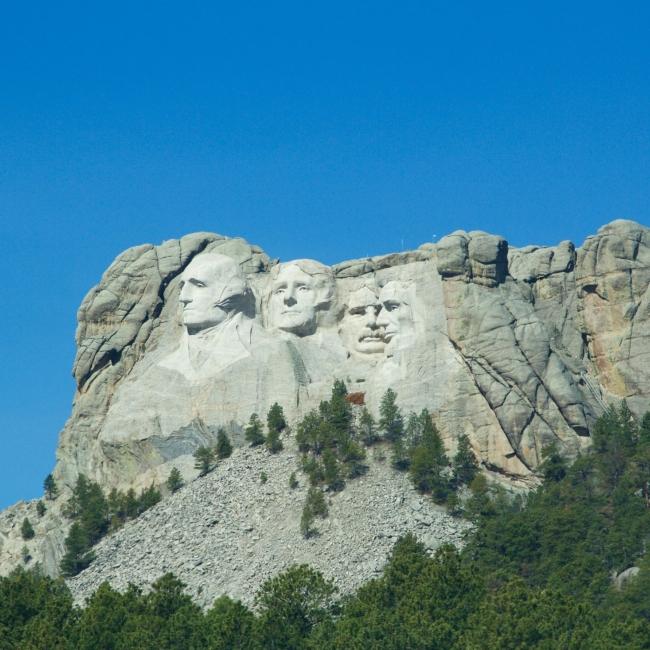 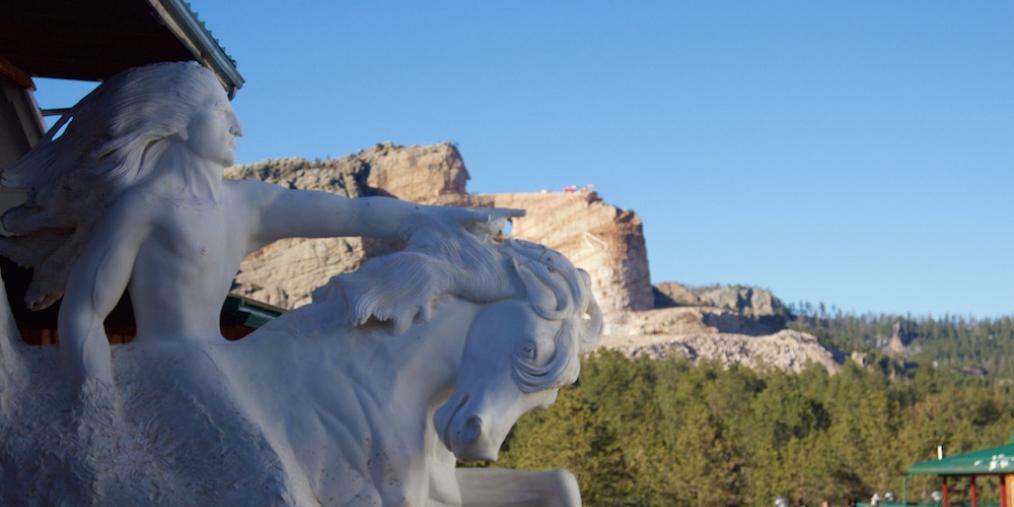 Accomplishing my 72-hour mission would require some early starts, beginning with today, up by sunrise to road-trip to Spearfish. Following an hour drive northwest from Rapid City, I pulled into Spearfish, noticing a snow-covered mountain peak just beyond it that I thought would be fun to hike.

Minutes later, after picking me up in Spearfish, my friend Katlyn was pulling up to said snow-covered mountain. From atop a carved mountain to atop a snow-covered mountain, all in less than 24 hours. The hike, Crow Peak, couldn’t have been a more perfect distance, difficulty and length of time, taking about three hours to hike. Summit views included the expanse of South Dakota, including nearby ski slopes (Terry Peak and Deer Mountain), and further afield, Wyoming.

Katlyn had to head out, but needless to say, I had worked up an appetite and the only fitting reward seemed to be tacos and ice cream. And that’s what I found in the town of Spearfish, with trout tacos (this is the Midwest after all) for lunch at the appropriately named Steerfish and ice cream at Leones' Creamery. I’m not going to lie, it was some of the best ice cream I’ve ever had. Obviously, I got two scoops.

From here it was onto what Spearfish is perhaps most known for, Spearfish Canyon, a 20-mile route past canyon walls, waterfalls and flowing creeks. It’s the kind of road trip route I expected to find deep in the cut of South Dakota, but not so close to a town like Spearfish. The bigger surprise was finding out that it was here where the final scenes of Dances With Wolves were shot.

By now I was thirsty. So, it only seemed appropriate to quench my thirst at nearby Crow Peak Brewing Company, and then, afterward, in Sturgis at Black Hills Dakota Distillery. It was an afternoon of IPAs and moonshine, a merging of my worlds, since I hail from the south (hello, moonshine) and now call California home (they don’t call them West Coast IPAs for nothing). Best afternoon of après-hiking ever? I think so. 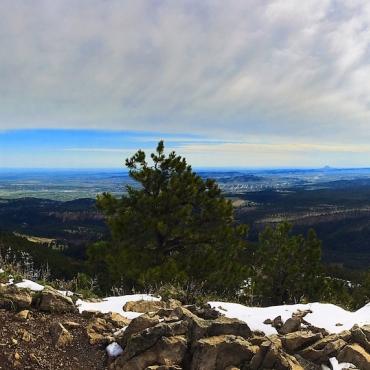 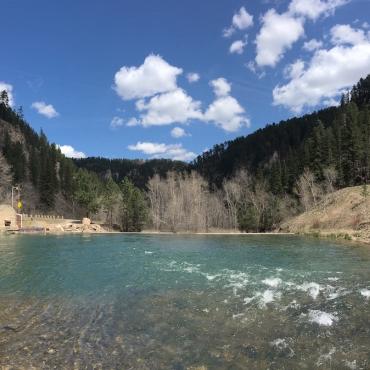 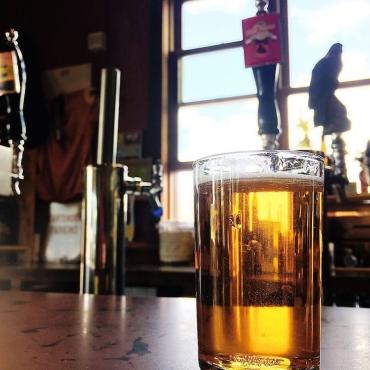 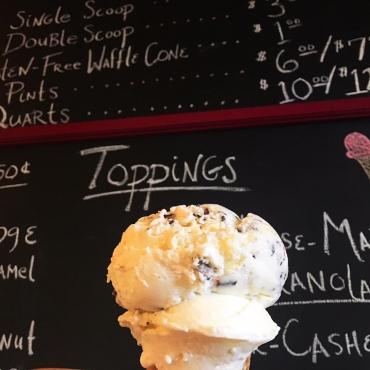 Today was my own version of the Amazing Race. Waking up at the break of dawn, the goal was to see and do as much as humanly possible on my last full day in South Dakota. This was a bucket list trip, so obviously I wasn’t going to visit and not see Mount Rushmore. And I’m glad I did this first thing, since the light early in the morning was hitting the massive sculpture perfectly to get some great shots of the presidents. It was mesmerizing; the detail and size were awe-inspiring. When I think of sculptures, I think of something like a bust or a monument that typically isn’t much larger than myself. But these are 60-foot sculptures, carved into the mountains of one of the most beautiful regions of America. Mind. Blown.

From here, it was mere minutes south to Custer State Park, which I honestly didn’t know a lot about, and had never really considered visiting. But I was right here, so I’d be remiss not to go. And, boy, am I glad I did.

I started along the Needles Highway, passing by Sylvan Lake, where huge granite boulders surrounded the small lake. It was otherworldly. And I was just getting started. I continued down the highway, where I twisted and turned as large granite spires rose above me on both sides of the road until I came to the summit, where I’d have to pass through a narrow rock tunnel to continue on. It was harrowing yet amazing, like a natural formation I’d expect to find deep in the European mountains and not in South Dakota.

I continued on the Needles Highway until reaching the Wildlife Loop, which obviously I had to take to see just what kind of wildlife I could find. I drove slowly for a couple of miles, scanning both sides of the road, eager to see a huge animal leap out of the forest and cross the road. I saw nothing. I drove a couple more miles. Still, nothing. And then, finally, at a campground restroom building of all places, I saw a huge American bison. I stopped for several minutes and took photos from every angle possible, lest it be the only wildlife I saw.

It was only minutes later when I saw three more bison. Something told me I could keep going and there’d be even more. And, on the next turn, I saw three bison eating alongside the road. Then, just beyond them, a field of more than 100 bison with several pronghorns in the same field but maintaining a safe distance it would seem. This was like the Disneyland of state parks. 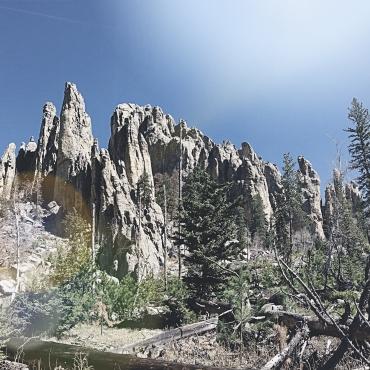 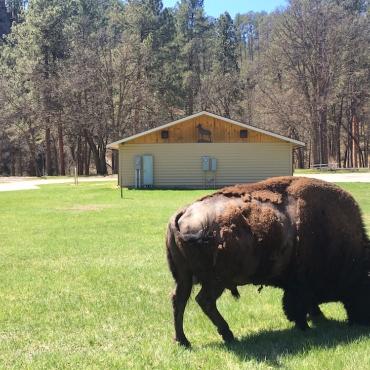 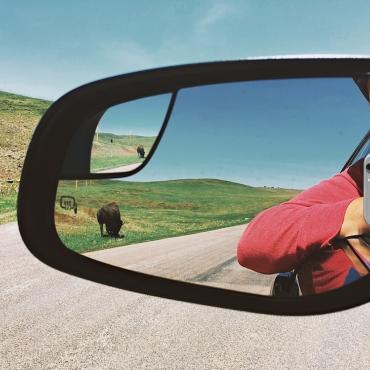 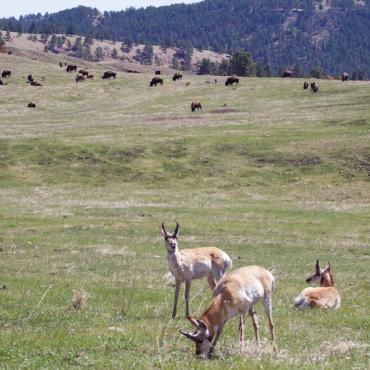 That was a lot for one day. I needed a break and that break was in nearby Hill City at Prairie Berry Winery, which could certainly be considered one of the most historic wineries in America, dating back to the late 1800s. I did a quick tasting of their award-winning wines (free wine samples for the win), and picked up a bottle to take home before stopping at their brewery, the recently opened Miner Brewing Company. I was going through a flight of beers (all of which, like their black IPA, were unique), when Katlyn (who I had hiked with the day before) called. “Finish your beer, and immediately drive to Wall Municipal Airport. You don’t want to miss this.”

Minutes later and I was driving 80 mph east on Interstate 90 on a 75-minute drive to Wall’s airport. I use the term “airport” lightly, since it’s more of a grass landing strip located just beyond Badlands National Park. What happened next happened so fast. One moment I’m shaking hands with the mayor of Wall, an 800-person town, and moments later I’m strapped into a two-seater prop plane flying toward the Cheyenne River and Badlands National Park. It’s one thing to visit a national park; it’s another thing to fly over a national park. It’s a whole other thing to fly just over the top of a national park’s peaks in a prop plane, with the window open and the wind flying through your hair! It was a surreal experience, flying above some of the most dramatic landscape in all of America. It was all so stupid-beautiful, from the craggy peaks, to the sweeping plateaus, to the green prairies contrasting with the otherworldly buttes and spires, to the bison and pronghorns below. When we landed back on the grassy airstrip, I most certainly had one of the largest grins on my face I’ve ever had.

While Wall is known for its proximity to Badlands National Park, it’s perhaps most known for Wall Drug. What began as a small-town drugstore in the early 1900s could now be described as the most unique western-themed shopping mall I’ve ever been in. I next found myself in the home of one of Wall Drug’s family members, Ted Hustead, sharing beers together as he whipped out a map (yes, a map) and showed me how the drug store has evolved over the last few decades.

Naturally, all that was left was visiting Wall Drug. I made a beeline for the maple donuts, obviously, before heading to the Wall Drug Backyard, where I jumped on top of a giant jackalope (seriously), checked out the saloon and adjacent T. rex (yes, it has an animatronic dinosaur).

Wall Drug was altogether quirky and amazing and something I couldn’t take my eyes off of. The same could’ve been said about my 72 hours in South Dakota.

In 72 hours I had seen some of America’s most epic sculptures, driven through natural rock tunnels, seen hundreds of bison, flown over the Badlands in a prop plane, summited a peak, drank from South Dakota’s oldest winery, and visited one of the most renowned drug stores in America. Now that’s a South Dakota bucket-list trip. 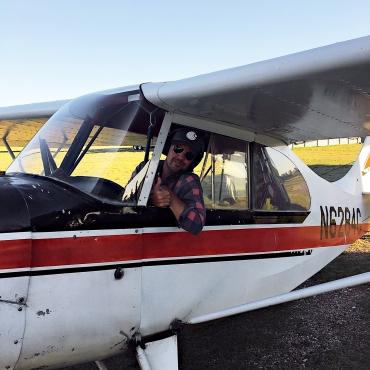 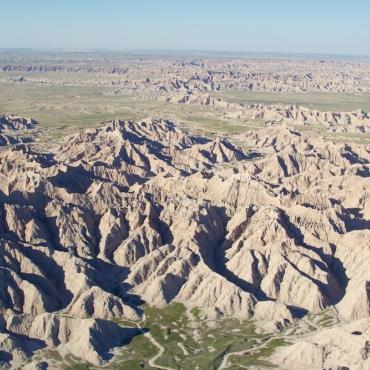 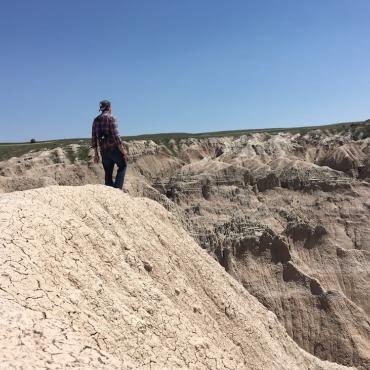 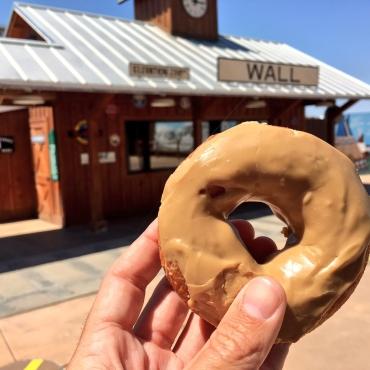 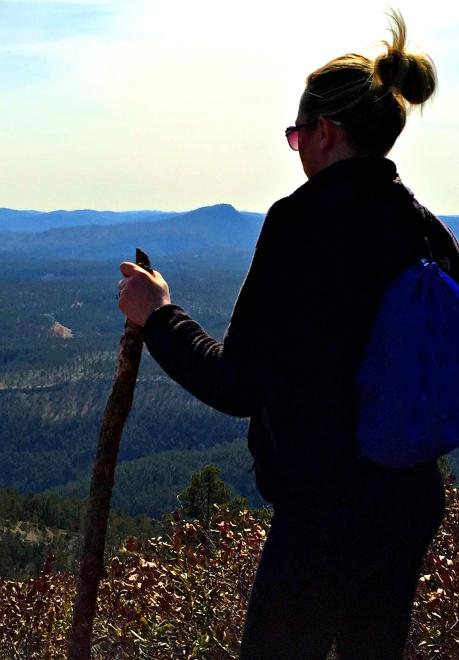 A Hike to Crow Peak Summit 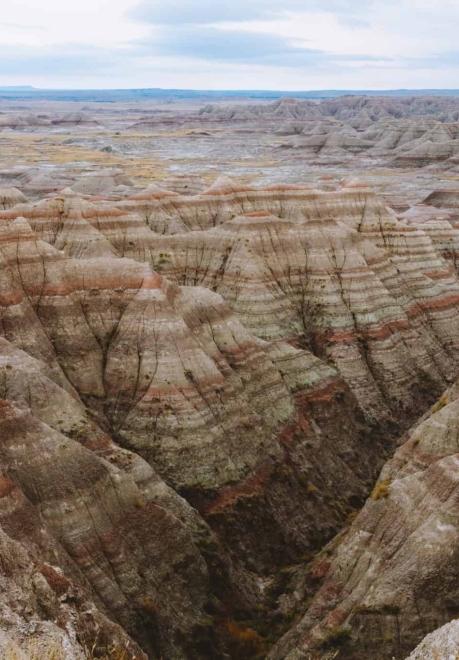 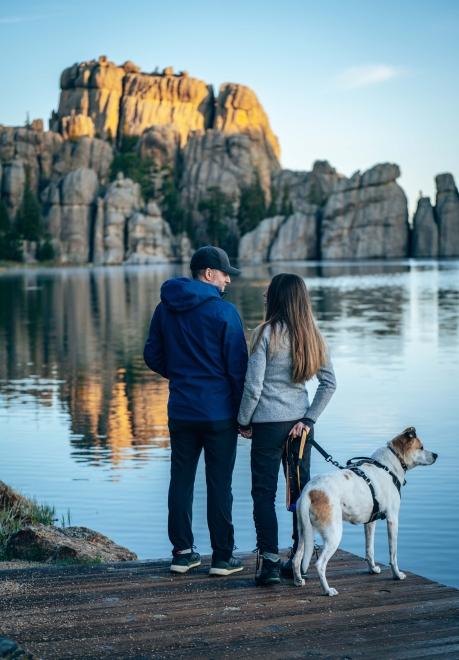 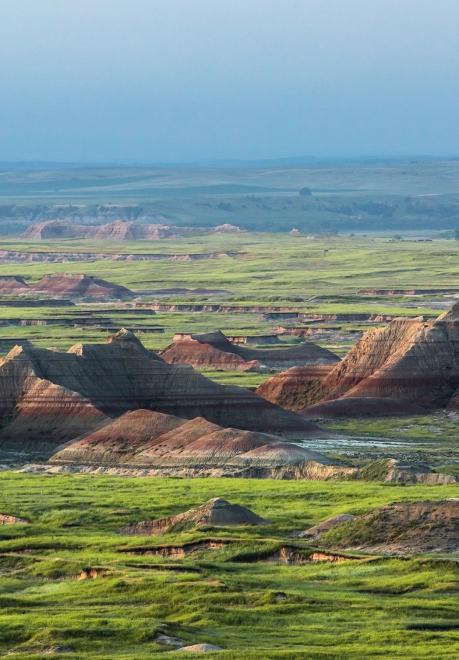