Hooked Up and Riding High in the Black Hills

It’s early September and we’re westbound on Interstate 90, cruise control set, gliding smoothly and swiftly at 80 mph across the windswept plains of Middle America. Everything changes over the hill at Chamberlain. We can’t get there fast enough. Here, the Missouri River reveals itself and broad, rolling hills abruptly erase the monotony of eastern flatland agriculture. Farms suddenly become ranches, hills become Badlands, and near Rapid City the landscape transforms yet again into the ponderosa pine-covered Black Hills—our final destination. My foot sinks deeper into the gas pedal as we grow restless, anticipating the days ahead.

Andrea and I needed to go. Somewhere. Not too far, but just far enough to call it an authentic “road trip.” We needed a break from the grind as summer melts into fall. An opportunity to recharge and take in new scenery with a much-needed breath of fresh air … accompanied by a few relaxing sips of fermented fruit and grains along the way. South Dakota’s Black Hills are less than 10 hours from our Twin Cities home, and those hills are bustling with limitless indulgences.

We trusted our South Dakota accommodations to Airbnb, leading us to a quaint, clean, and very private lower level of a beautiful home at the top of a hill in Piedmont. This would be our home base, putting us minutes from Rapid City and within an hour of Deadwood, Spearfish, Hill City, Custer, and Keystone (Mt. Rushmore); all these reputable South Dakota stopovers were on our short list for this mini vacation. However, we’d come to realize that South Dakota wants you to return, frequently, to fully absorb its diverse splendor. Two full days aren’t nearly enough.

Our first stop was Deadwood. There’s nothing dead about this charmingly raucous Black Hills city … other than a handful of dead gunslingers lying in the streets at previously scheduled times each day. Deadwood’s Old West reenactments are a touch on the hokey side, but they’re worth seeing—even if just to brush up on some history surrounding local icons such as Wild Bill Hickock (you can meet him and watch him take a bullet, too).

A half-day in Deadwood allowed us to cover the bases that were of interest to us, but if you’re into gambling you could burn more time at slots and tables galore. There’s more than one place to wet your whistle in Deadwood, and surprisingly the booze is reasonably priced. Even if you don’t fancy whiskey, it behooves you to shuffle across the sawdust floor at Saloon #10 and grab a bump to get a lil’ Western. 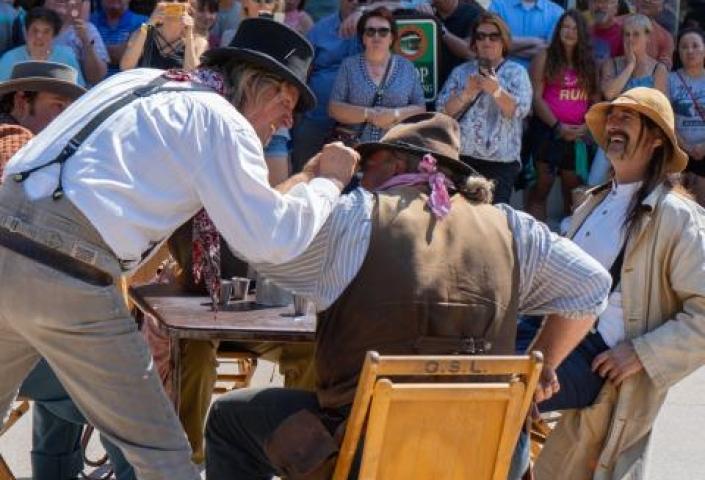 The second half of our first day found us traveling southeast out of Deadwood on Hwy. 385. Custer was our initial target, but we landed short and stayed longer than expected in Hill City. Good wine and beer will do that to us. A free tasting at Prairie Berry Winery pleasantly surprised our palates. (That doesn’t say much coming from me, but Andrea is a discerning wine-o.) The Pheasant Reserve and the winery’s flagship Red-Ass Rhubarb deserve a special nod.

Prairie Berry's owner, Sandi Vojta, brews small-batch beer at her Miner Brewing Company next door. Everyone has their calling, and Sandi clearly found hers in crafting adult beverages—her suds are just as sultry as her wine. We tried two full flights, with Chokecherry Brown and Summer Red earning the highest accolades. By now our stomachs were craving sustenance to soak up the afternoon’s shenanigans. Miner was fresh out of homemade pretzels and beer cheese, so we jumped back on 385 and made a quick stop at a popular greasy spoon called Sugar Shack. Not bad. Order the Sugar Burger. 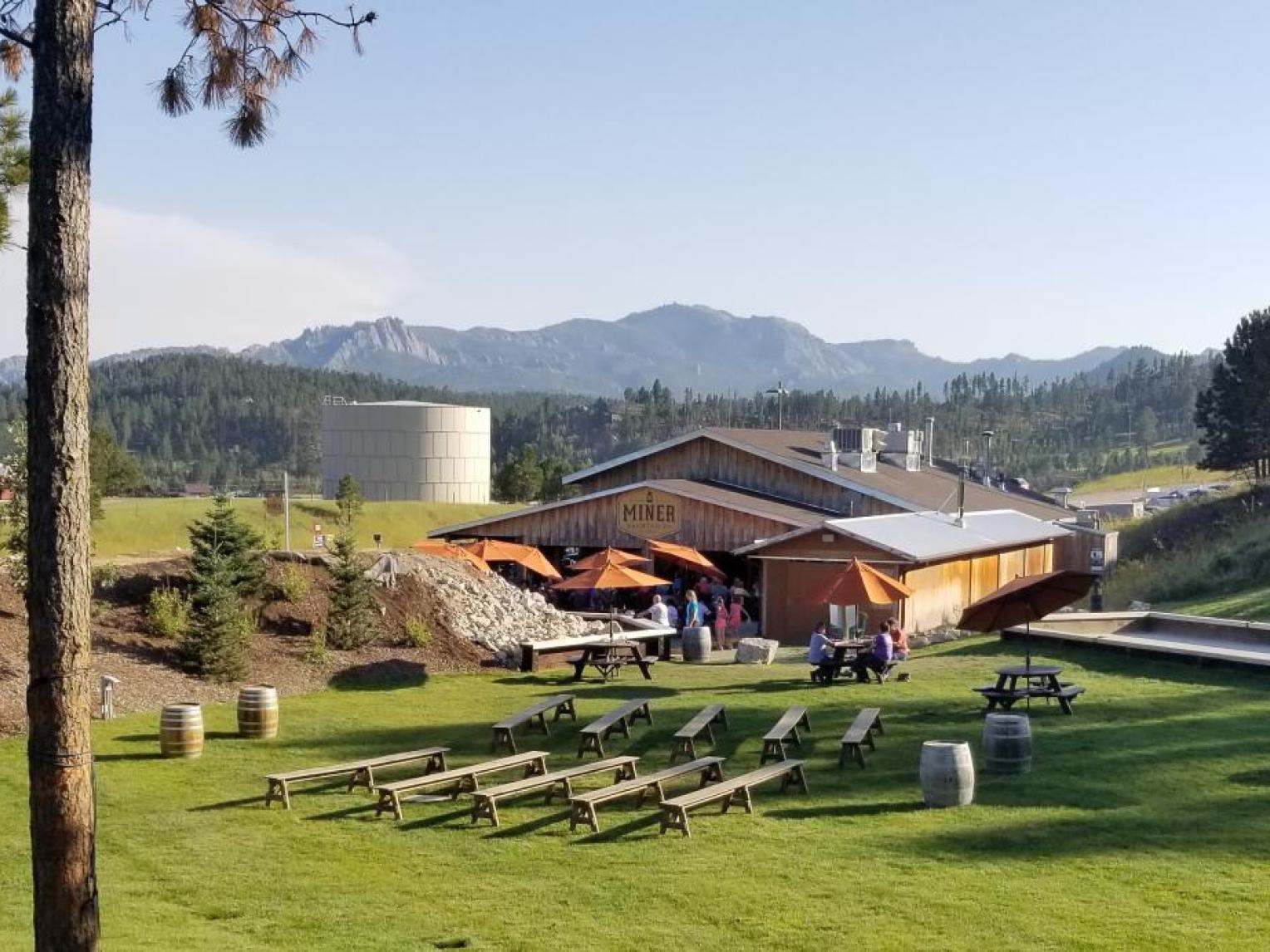 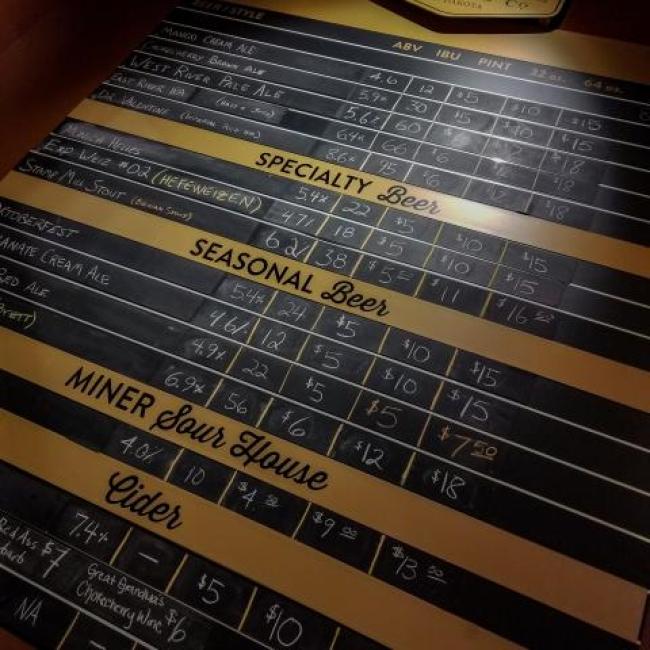 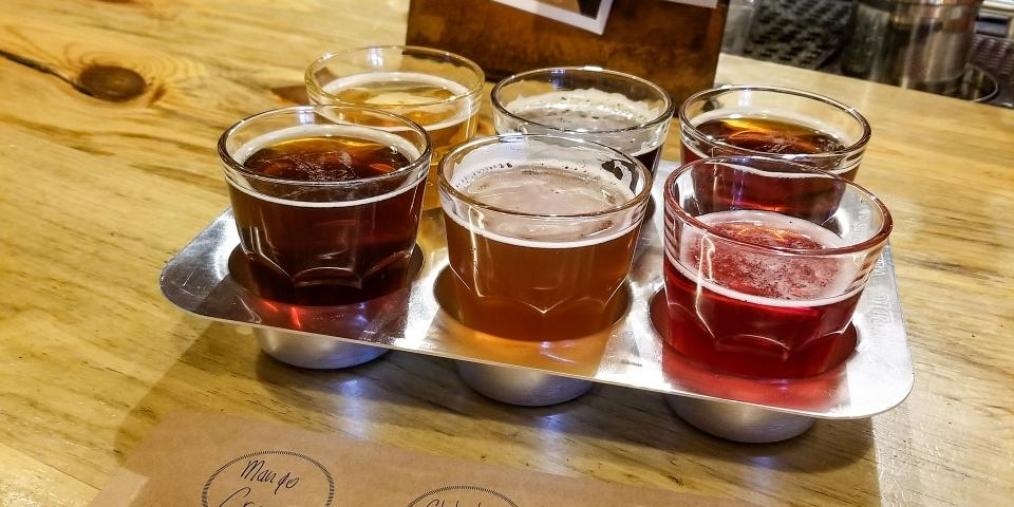 There are countless ways to explore the Black Hills, but justice can’t be done if you try to do it from the blacktop, through the windshield of an air-conditioned ride. You gotta get out there and get dirty. When I learned there was a Yamaha Outdoors partner nestled off a gravel road just 20 minutes from downtown Deadwood, I made a call right away. After speaking with Mike, owner of Mystic Hills Hideaway, the groundwork was laid for a memorable day in the hills. I reserved a new Yamaha Wolverine X4 side-by-side, plus Mike promised to hit up his mechanic for insight on trailside trout fishing opportunities. We picked up our Wolverine the second morning of the trip and Mike made good on his word to get me on reliable trout water. We were locked and loaded.

There are more than 600 miles of trails for OHVs (Off Highway Vehicles) in the Black Hills National Forest. Navigation isn’t my strong suit, so before bumping the Wolverine into high gear I fired up the new Yamaha Adventure Pro GPS system. As luck would have it, one of the pre-programmed loops would bring us precisely to where I’d catch my first Black Hills trout. Andrea cross referenced the route with an old-school paper map throughout the journey, but aside from user error the Adventure Pro never lead us astray.

Admission: I’ve never understood the allure of off-roading for leisure. I’ve always used my Yamahas as tools—for working, hunting, and getting from Point A to Point B when a pickup truck doesn’t cut it. But merely driving around in circles on trails, just for the sake of spinning wheels? That concept has never tripped my trigger, so I didn’t know what to expect when we pulled out of Mystic Hills. As we cut into the first rugged stretch of Black Hills on our Wolverine, the off-roading enlightenment washed over me as I looked at Andrea and we exchanged ear-to-ear grins. This was fun. Of course, it is what you make of it, and soon we’d be braking at Rapid Creek to see if the rumors were true about its excellent trout fishing. 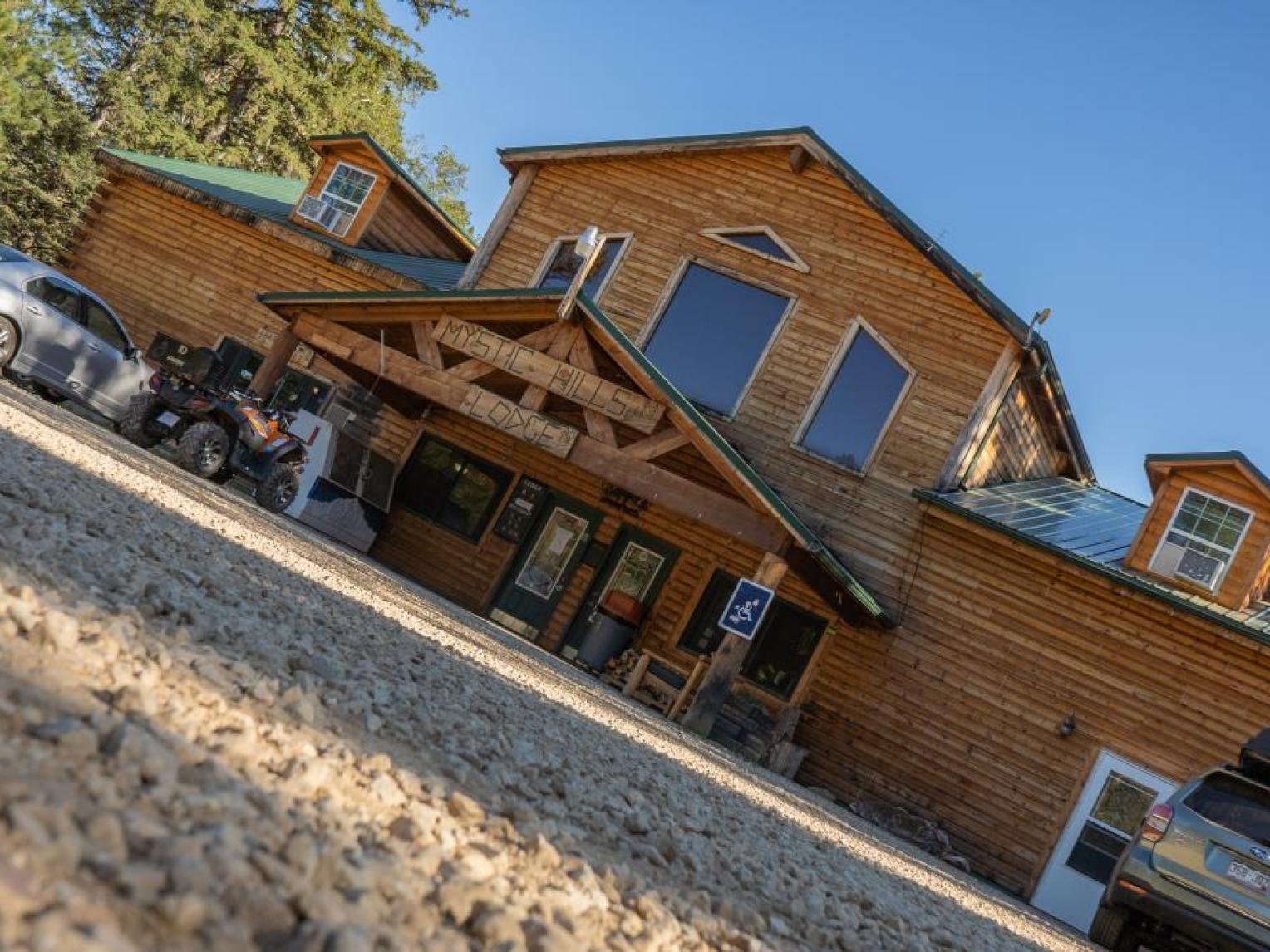 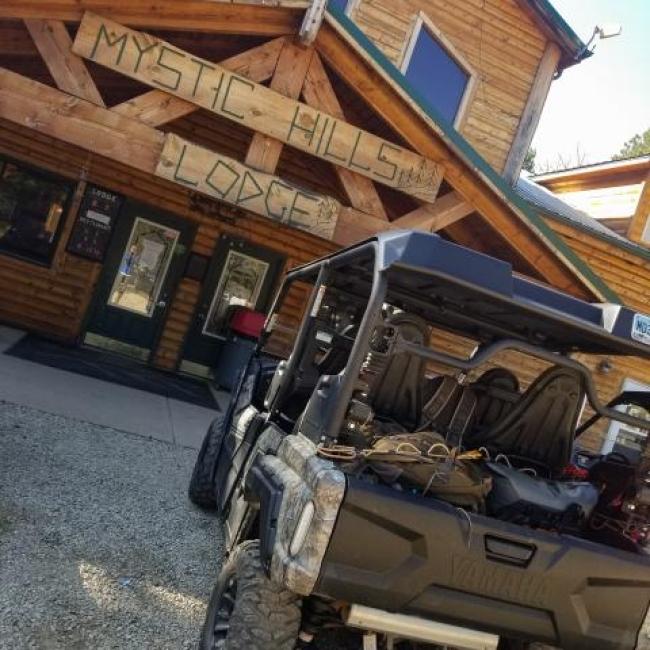 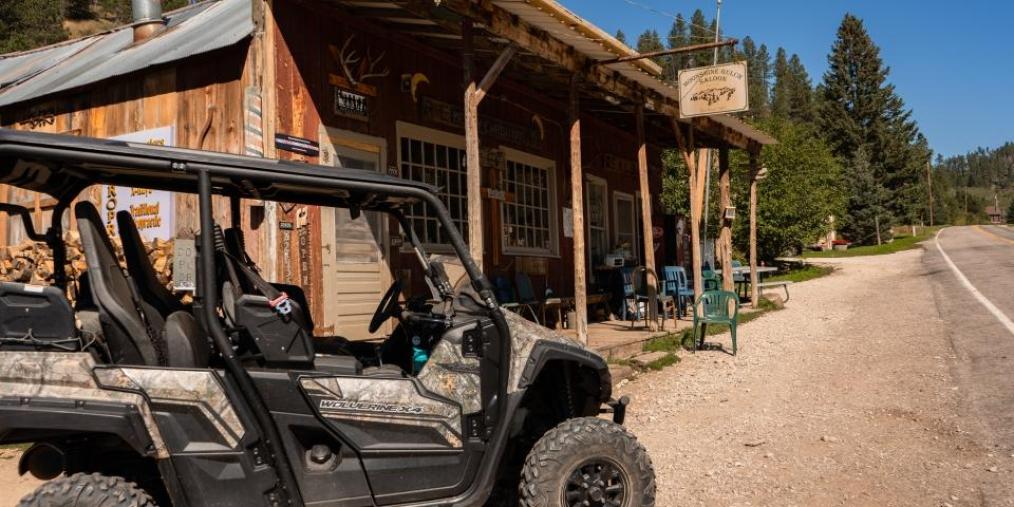 TROUT FISHING IN THE BLACK HILLS

Admission: I’ve never understood the allure of off-roading for leisure. I’ve always used my Yamahas as tools—for working, hunting, and getting from Point A to Point B when a pickup truck doesn’t cut it. But merely driving around in circles on trails, just for the sake of spinning wheels? That concept has never tripped my trigger, so I didn’t know what to expect when we pulled out of Mystic Hills. As we cut into the first rugged stretch of Black Hills on our Wolverine, the off-roading enlightenment washed over me as I looked at Andrea and we exchanged ear-to-ear grins. This was fun. Of course, it is what you make of it, and soon we’d be braking at Rapid Creek to see if the rumors were true about its excellent trout fishing.

Andrea and I parked the Wolverine at a convenient pull-off, deep in a jagged canyon just a stone’s throw from Rapid Creek. She cracked a cold one as I suited up in waders and tied on a fresh spinner. Fifteen minutes later I reeled in a skinny, but gorgeous Black Hills brown trout. Another aggressive little brown slammed my spinner around the next corner. This stretch was done, so we boarded the Wolverine and scouted for another.

Above a beaver dam and around a bend, a perfect run sat just beyond a stunning rock wall. “If there’s not a trout in here, I’ll be shocked!” I yelled to Andrea as she shadowed me along the bank, camera in hand. Three casts later, a silver flash and a big thump were followed by an instinctive sweep of my rod. A chunky rainbow trout flew out of the water, nearly spitting the single hook of my spinner. I reached for my net and landed the colorful slab, “Woo-hoo!” echoing down the canyon walls. 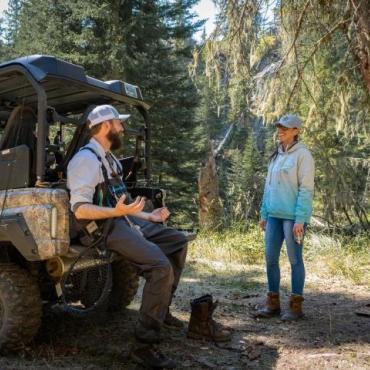 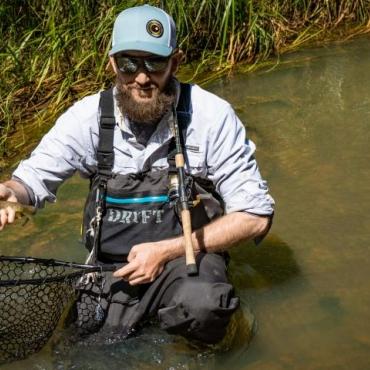 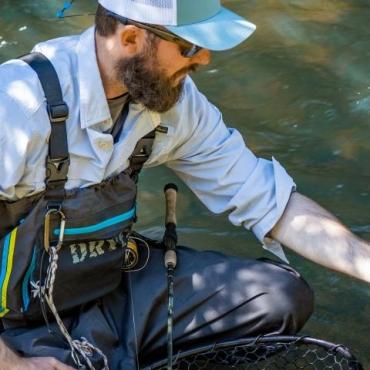 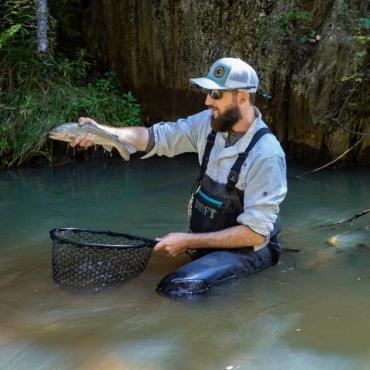 We checked the time and scoffed, knowing our exploration was ending when it had just begun. Back at Mystic Hills, we parted ways with the Wolverine and said our goodbyes to Mike and his crew. Custer Peak Road hadn’t even faded into the rearview mirror when we began discussing plans for our next—much longer—trip to the Black Hills ... and certainly an extra day on a Yamaha. 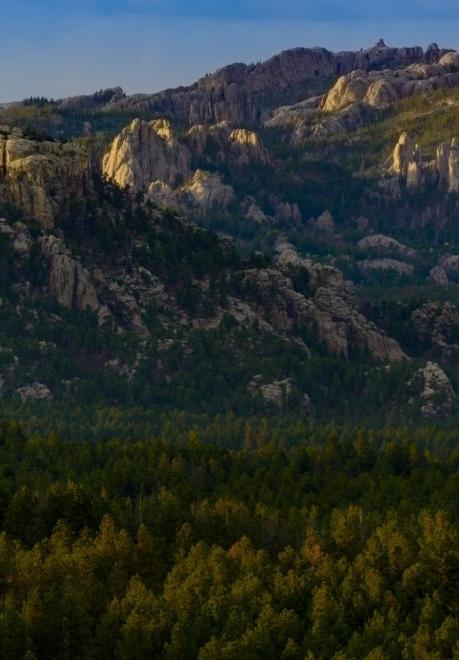 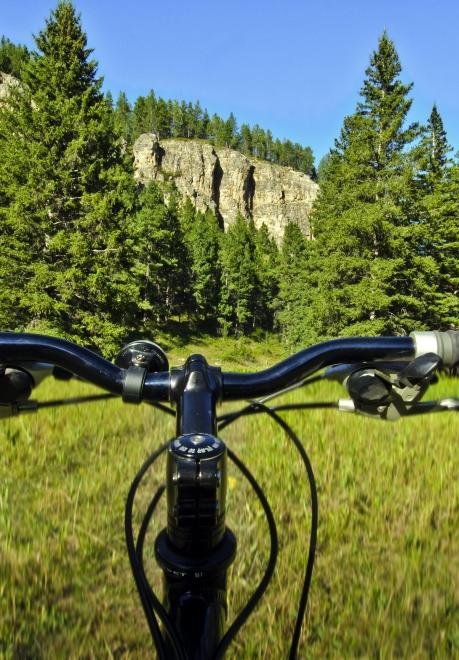 7 of the Best Mountain Biking Trails in South Dakota 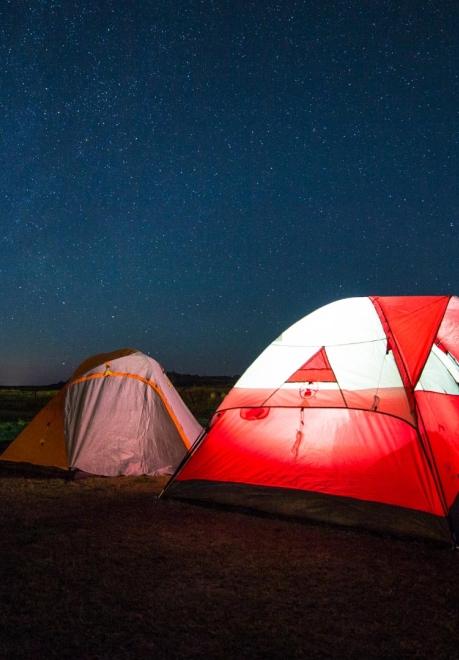 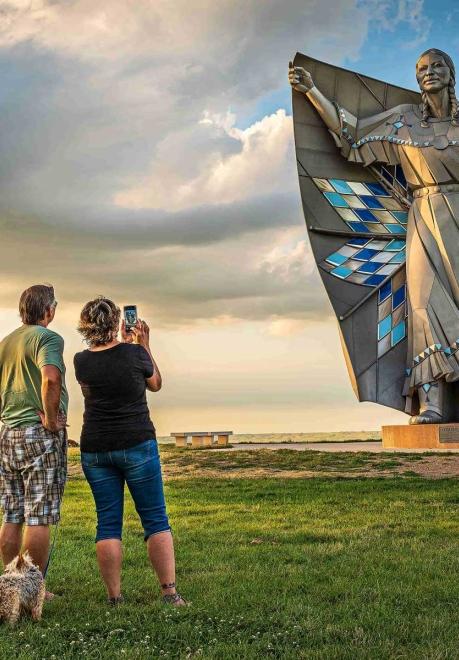 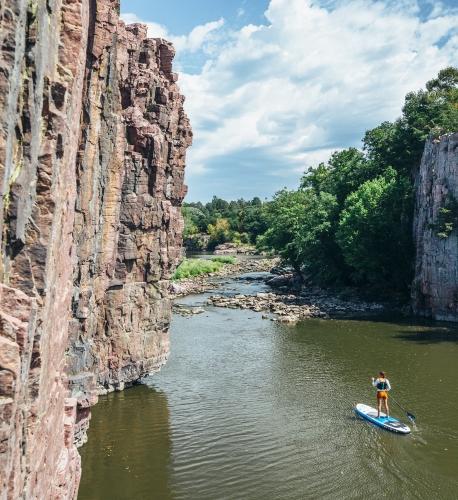